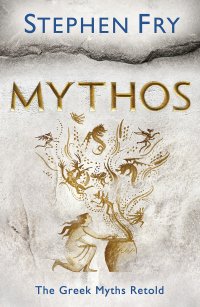 I am a big fan of all kinds of mythology. I finally got around to reading Mythos which is Stephen Fry’s retelling of the Greek myths. Yes, Stephen Fry the comedian and actor. He even read/performs the audiobook, roughly 15 hours in length, which is how I made my way through this book. Though the overall story tells of a history of the world, it is a collection of smaller stories which makes it is easy to find stopping points or pick up without getting lost even when many stories build upon or reference earlier ones. I really enjoyed listening to Fry tell these stories and recommend the audiobook version though any version will prove entertaining and enlightening.

One thing I really enjoyed about Fry’s retellings was his method of showing how each story influenced the world we live in. He does so primarily by telling how certain words derived from or retain connections to the myths. You can certainly tell that he, perhaps with some assistance, conducted thorough research into these myths and enjoyed not only telling the stories but showing how they continue on.

It is commonly known that many of the Greek myths, or rather the problems at their center, stem from Zeus’s inability to keep it in his pants. This is of course true, but there is a lot more to the myths and there was much from this volume that was new to me. There were several stories I had not heard before and many characters I had known about but did not fully know their backgrounds or origins. For example, I knew the standard interpretation or general reference to Sisyphus, but I knew practically nothing else about him. Now I do and I feel much better about it for some reason. The same goes for many others including those who came before the more common Greek gods. I knew of Chronos and his relation to Zeus but I did not know his origin or those who existed before him. I did not recall how humans came to be via Greek myth but now I know that too. Thank you Prometheus.

There is so much depth and richness (both fascinating and horrifying) to the Greek myths and they greatly influenced, and continue to influence, much of the world. They are arguably the most well-known of the world mythologies and many stories today are influenced or reference them. There are of course those that directly relate to or incorporate the Greek gods such as the Percy Jackson series (that I have yet to look into), but there are many that are more subtly influenced by these myths. Fry has published additional myth-related books and I may eventually read, or listen, to them.

If you are a fan of mythology, history, or just interesting stories, then this is a book for you.

One thought on “Mythos”