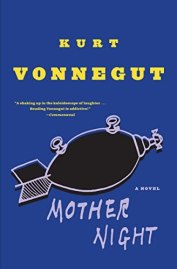 Mother Night is Kurt Vonnegut’s third book and was originally published in 1961. It is one of several of Vonnegut’s novels that is relatively short and, at least for me, read easy. I very well could have finished it in an evening. I did finish in just a few days.

This story features Howard W. Campbell, Jr. who is wanted as a WWII Nazi war criminal. However, he was secretly a spy for America, his native country, but has no way to prove his work that helped defeat the Nazis and no agent from America will or can vouch for him. His work as a spy prevented him being tried as a war criminal directly after the war, but after 15 years lying low in New York, he becomes the center of many people’s, and several nation’s, attention once again.

Not only does this book drip with references to Vonnegut’s own time during WWII, but it provides a fictional yet very real perspective of how people still hold strong beliefs and alarmingly hateful ideas despite what paths have been walked throughout history. I hate to say that this book very much remains relevant considering the growing number of people spouting old hatreds that should have been buried by society long ago (or perhaps the hatreds were always there and they found new ways or more confidence in shouting them).

Howard W. Campbell, Jr. is a man who did and promoted terrible things. He admits as much and states how he was able to do them in order to survive the times that enveloped much of the world. He knew the evils he committed but held shreds of hope that his work was worthwhile as through those evils he provided information to assist those he truly believed in. His struggles resulted in a mostly apathetic, shattered old man who finds a way to live through any situation or society. Unfortunately, I think to a degree, we all take part in a society where we disagree with many aspects and wish things were better than they were or more accepting of the things we hold most valuable.

For me, that would be books, and the recent increases in book bans (including works by Vonnegut) only increases my desire to speak up and spread the information others want to suppress. Perhaps this counts as doing just that.