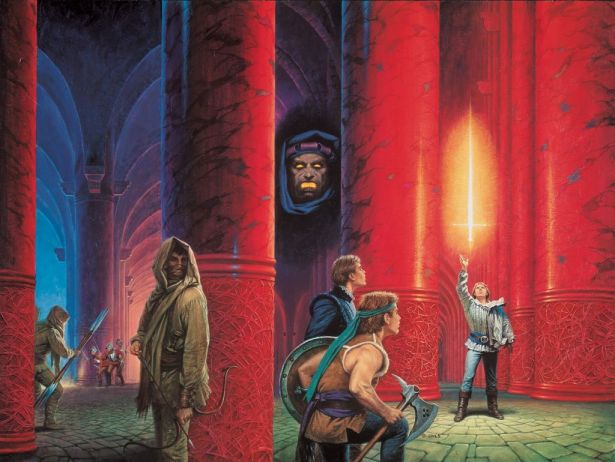 The Dragon Reborn is book three in the Wheel of Time series. There are many things I liked in this book and several things I didn’t. I’m sure many things I discuss below will come to fruition or find resolution at a later point in the series, but today I am just giving my reaction/opinion of the story so far. Be forewarned, this post will contain spoilers. If you are currently reading the series for the first time, tread lightly. If you have already read the series, feel free to have a few laughs at the comments I’m sure will be amusing as you are privy to the information I have yet to read.

Before we begin, I am loving this series. There are several things I may critique/comment on here but don’t think any of them are jabs at the story or Robert Jordan, because I am having a great time.

Now, let’s begin with the beginning, or shall we say the prologue. This book opens up with the Children of the Light. I think these guys are dumb. Most readers probably agree with me. They have been riding around causing trouble in the name of the Light like some fanatical cult and it just irks me. The opening leads us to believe their leader, Pedron Niall, is planning some interesting maneuvers that will allow this group to gain a ton of power. Then we never really see these guys again the rest of the book except when the girls humiliate Dain Bornhald by abusing their power and pissing off Verin. Which, to be honest, I couldn’t care less about Dain having lost his dad in the previous book. I hate these guys. Especially Byar, but I think Byar and Perrin will have to face off later on and Perrin will totally wreck this guy, and I look forward to that confrontation. As for the rest of the Children, they are pretty much Darkfriends as far as I’m concerned.

Speaking of Perrin, let’s go ahead and move on to him. Perrin is one of my favorite characters so far. He is my kind of guy. Physically powerful but a thinker who tries to read a situation before acting and he doesn’t like to hurt others (except the Whitecloaks he destroys while saving the Aiel from the cage). He tries to do what is right. But I wish he would stop trying to hide from what he is and accept his abilities to communicate with wolves. I’m not sure why he fights it so hard. He knows Elyas can control it without turning feral, but he did see the villager who lost himself to this ability so I understand his concern. He doesn’t even try to learn any amount of control except how to shut it off. I know he will come to terms eventually, but I’m impatient. Maybe Faile will help this arc progress.

This book introduces Zadine/Faile who becomes (rather quickly) important to Perrin. They become a little too close a little too easily for my opinion. I don’t care if Min (who also disappears completely after the early chapters) predicted the caged Aiel, the falcon, the hawk, a Tuatha’an with a sword, and an encounter with Lanfear at some point. In this book we only get the caged Aiel and the falcon in the form of Faile. We do not get the Tuatha’an with a sword, the hawk (which I assume may be another woman, interesting), and the encounter with Lanfear unless we count the dream encounter. I do like how Hopper is his dream guide though. Anyway, as for Faile and Perrin, I feel like we didn’t get much of an introduction to her as a character and I’m a bit underwhelmed with her at the moment. She is a hunter for the horn but she becomes privy to the fact that the horn has been found and that Mat has blown the horn, thus securing her tie to the group and effectively ridding her of her initial goals. I guess I’ll just have to wait until we get to know her more. I have started book four and it seems like she and Perrin are already married though. I feel like I missed something.

Moving on. This book is different from the first two in that it doesn’t follow Rand at all. It is all about Perrin, Matt, and Egwene with Nynaeve and Elayne. Out of the nearly 800 pages I think Rand was in like 15 of them. This is fine and it’s great to get more of these other characters, but I hoped to get a little more from what I consider our main character especially after what happened at the end of book two.

I did like how Mat gets his own storyline. I mean, he practically becomes a sideline object after he takes the dagger in book one. Even when he blows the Horn of Valere he doesn’t really contribute much. The heroes he calls didn’t even talk to him (did they?). After he is healed, we get a reintroduction to him as a character which I thought was fun and engaging even though his luck seems to be way too convenient and he is a little bit of a dick. I’m sure his luck will play out interestingly moving forward. Egwene does see him playing dice with Ba’alzamon in her dreamworld intuition thing.

I’ll save Shai’tan for later and move on with Egwene. She and Elayne become Accepted pretty quickly despite their transgressions. I do think the ritual to become Accepted is great. We get to see so many things that can reveal potential plots/glimpses into the alternate realities. That is if they are actually real. We also get an intimate insight into each character we see go through the trial as they must face their fears. It just seems they are raised to Accepted without them having been trained properly. Is the Aes Sedai simply merit/strength based? I thought it was a highly disciplined organization. There is so much that goes on within the Aes Sedai network too. Liandran (this bitch) and the Black Ajah make all relations tense in the tower and we can’t trust anyone. I never liked Elaida, but we are led to believe she might be Black Ajah, but then toward the end it seems like she isn’t and really just cares about Elayne. I don’t know about this story arc, but I’m ready to find out more. I hope Liandran gets the collar if you know what I mean.

Oh, and how the hell does Lanfear just walk around the White Tower with nobody noticing? Seriously. She practically yells to everyone she runs into that she hates Aes Sedai and for sure isn’t one. That doesn’t throw any red flags? Can she just hide her use of the One Power from every single Aes Sedai it the tower and walk around freely? No one questions her being there if she isn’t Aes Sedai? She even turns into Else at some point? I have no idea what to think about her and she is barely in this book after barely being in the last one in which she first appears. I think all we really learn about her in this one is that she can control the dreamworld somehow and she thinks she is better than Ba’alzamon.

Lets talk about the Forsaken real quick since Lanfear is supposedly one of the strongest. Have they all escaped? Are they all already in positions of power across the land? When and how did this happen? We learn of several in this book. One controls Illian. One controlled Tear (did he die?). One, presumably, has turned our strong queen Morgase into a weak little infant. How does she go from threatening the White Tower to the mind slave of some random dude? Also, I’m looking forward to the Morgase and Thom reunion. If it doesn’t happen I’ll be disappointed. I find it strange the Forsaken are now everywhere and pretty much controlling each city in their own version of the Great Game. I know the Forsaken are supposedly super powerful, but the speed of their ascent in the various regions of the world is striking. Did I miss any Forsaken that showed up in this book? I don’t remember.

Anyway, what’s next? Lets move on to the Dark Lord since we don’t see Padan Fain in this book. I’m sure he will pop up later. We get another showdown between Rand and Ba’alzamon again at the climax of this book. I swear, if I find out that Rand needs to find five more Horcruxes before he can kill the Dark Lord for real, I’ll be pissed. I know this series came out first, but I couldn’t help but notice that he has fought the big baddie twice…..and a half if we count the first book. Each time he believes he actually killed him. I hope this trend ends here.

Rand has Callandor and we for sure know the Aiel are the People of the Dragon and will be showing up a lot more now. I’m okay with it since I like them as characters. They remind me a little of the Fremen from Dune though I know they are much different. I did feel like the confrontation at the end was a little anticlimactic. The Forsaken in the Stone of Tear gets roasted by Moraine fairly easily just prior to Ba’alzamon randomly showing up in the shadows. Then Ba’alzamon runs like a wuss which seems unlike the character he is supposed to be. I think part of the reason it seems anticlimactic is that we see so little of Rand throughout the book and then we go right back to him like the long absence wasn’t even a thing. I also thought it was funny that the name of the book is technically Rand’s title and he isn’t even a major character in this one.

Okay. I think that is all I have to say about this book. I’ll continue to post about my read-through of this series as I complete each book. It may be awhile before I post about the next few since the next three books are the longest in the series. I have been getting a lot of reading in though so maybe it will only be a few weeks before I post about book four.

I knew this series had a huge fan base and I’m glad to have met several after my post about book two. I hope to meet many more as I read along, but I am also cautious about not having anything spoiled for me. However, if you are a fan, welcome and I’m glad to meet you. I welcome all discussions but try to keep it contained within the first three books for my own sake. At least until I discuss book four. Other than that, comment away. There is nothing more fun than discussing a book with fellow fans.

Next is The Shadow Rising.

2 thoughts on “The Dragon Reborn”