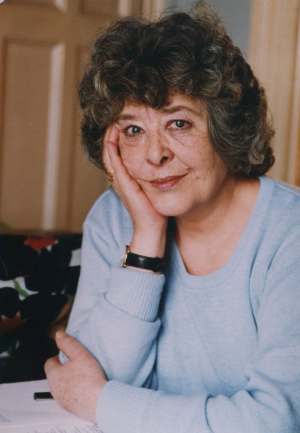 I first discovered Diana Wynne Jones through the adaptation of her book Howl’s Moving Castle by the well-known film company Studio Ghibli. I love the film and the book, and the two other books she wrote that tie into that world. Since finding her work, I’ve become more interested in her as an artist. Perhaps this may be partly influenced by stories told about her by other authors I like, such as Neil Gaiman who wrote about her and how he first met her. I don’t know why, but I’ll never forget that little story (if you want to know about it, you can read it in his book A View From the Cheap Seats).

I read her book Reflections: On the Magic of Writing which is almost more a memoir than a book about the craft, which suited me just fine. I learned more about her, which made me want to learn even more about her. One thing that really stuck out to me was that she had both C.S. Lewis and J.R.R. Tolkien as professors when she attended Oxford. Her thoughts on both of them were amusing to be honest. She had an interesting childhood though tough at times. Her wonder for the world never diminished despite living through darker moments of human history (primarily referencing World War II here). Her stories are skillfully written but are often marketed to children. I think she wrote them for children, but I think they have something for everyone, especially for adults who have forgotten the wonder they once held for the world.

I hope to introduce or read her stories to my children. They are magical and wholesome. I’m curious how my reading habits would have been different had I discovered her books earlier. I was probably mid-twenties when I first found them. Now that I have, I can return to them when needed so as to (hopefully) never lose my own sense of wonder in the whirlwind of adult responsibilities. I am grateful to have the opportunity. I am grateful she wrote her stories and let them out into the world. I’m sure she has impacted more lives than she could have dreamed possible. Diana Wynne Jones passed away in 2011 at the age of 77. Her works will likely live on for a long time. Much longer than my own lifetime at least, because once you discover a book that nestles its way into your heart, it will remain there forever to bring you comfort and joy. My hope is that you give her work a chance if you have not done so already. Of course, I suggest starting with Howl’s Moving Castle.