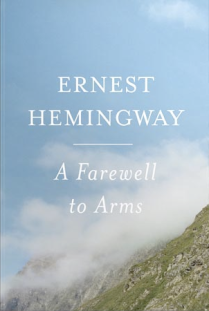 I recently read A Farewell to Arms by Ernest Hemingway because for the first time in a long time I didn’t have my next several books lined up to read and I impulsively felt like reading something old. This book was first published in 1929 (nearing 100 years) and is often mentioned as one of Hemingway’s best books or most often discussed at least. I picked it up and surprisingly had it finished in just a few days. I felt as if I could have finished it in a day or an afternoon if I was inclined to do so. It reads easily and quickly and perhaps that is simply Hemingway’s style though I can see how some people may struggle with his form.

The ease of his prose may be the best part of the book. The story is written well enough that you can get through quickly, but the story itself is a bit lacking when it comes to characters. Granted, this book was written in a time when women were still often treated as objects (which is a bit distracting within the book) and men made all decisions, but there is little that makes you care for either Catherine Barkley or Lieutenant Henry.

The story takes place during World War I and follows an American who is an ambulance driver for the Italian army and who enters a relationship with a nurse. This brief oversimplification of the story may lead you to believe it is a romanticized wartime novel, but I must warn you that is absolutely not the case. The merit I found in this book is the description of the war and the return to simpler times which may sound contradictory, but what I mean by simpler is a world society that wasn’t connected 24/7 through technology and people lived their lives, even through a war, in a way that was much simpler than what we know today. I will admit simpler doesn’t translate to easier. It was just a much different world 100 years ago. Sometimes it is nice to see glimpses into that world through novels like this one. It is also interesting to read a book about World War I that was much closer to the actual event and not clouded by how history views the war, and was not written by someone who was not alive during the war.

I know Hemingway is known to have a machismo complex within his writing, and throughout his life, and he is considered a master of literature. However, I think his name has become an icon of something other than what he was or has been placed on a large pedestal and glorified for both good and awful reasons. I also think that many people have not actually read his work, and younger generations would not read it given a choice. I assume that most who read Hemingway today do so in an educational setting. I could be wrong. His is a also name that likely gets invoked by people who claim to have read his work without actually having read it. The same is probably true for Fitzgerald and Dostoevsky and other literary giants who wrote what are considered classics today.

Regardless of the good and bad centered around Hemingway as a name, and the good and bad present within A Farewell to Arms, I am writing this as a book recommendation because I think it was worth reading (for me at least despite having both liked and disliked portions of the book). Perhaps you have not read Hemingway yet and want to give his work a shot. Or perhaps you’ve tried his work and prefer to stay away. Maybe you have always known of Hemingway and stayed away because of his large presence in literature and deem him overrated without actually knowing why you think so. All are valid reasons to make your choice. I only wrote this post because I read the book and found some merit in it. Only you can decide whether or not you want to give it a chance.