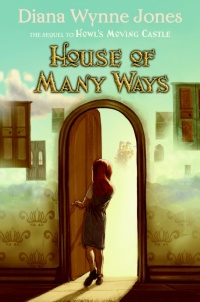 House of Many Ways is Diana Wynne Jones’s sequel to Howl’s Moving Castle. However, much like the companion novel Castle in the Air, this book spends the first half following a new character without any connection to the world of Howl’s except where magic is involved. It is really just before the halfway point that we get to see the connection, which is primarily Sophie.

Our main character for this book is Charmain Baker, who I must admit is not a very likeable character (despite the fact she is an avid reader herself). She is tasked with watching over her great uncle’s magical house while he is away receiving medical treatment from the elves. She does grow throughout the book, as good characters should, but she is a bit self-centered in a way that doesn’t leave much room to connect. The overall story and magic are fun much like the previous novels so it is definitely worth a read, and it is always good to see more of Howl, Sophie, and Calcifer.

I am glad I decided to read the three Howl books in order of publication because the events of Castle in the Air take place roughly two years prior to House of Many Ways and a few characters show up in this final installment. Though it is not necessary to read Castle in the Air to understand what occurs in House of Many Ways, the experience is enhanced having read the companion novel first. In all honesty, I would dare to call this book a companion novel as well instead of a true sequel because it focuses on new characters and events quite outside that of Howl’s Moving Castle. Some of the locations and the magic are similar, but the same could be said of Castle in the Air. They are all linked but none are truly cohesive in a way you would expect of a continuous story. Howl, Sophie, and Calcifer are more support characters and the overall story has little to do with the first book.