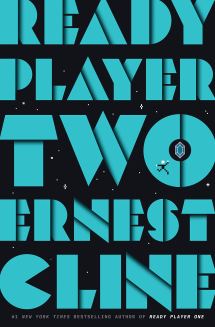 I’ll admit I wasn’t sure how there could be a sequel to Ready Player One, but Ernest Cline wrote one and I read it. Ready Player Two was released a few months ago and the story picks up the week or so after the ending of the first book. I went into this book with little expectations because unfortunately I saw several comments stating this sequel wasn’t too great, but of course I wanted to form my own opinion, which I am posting here (spoiler free). I have mixed feelings about this story but I did enjoy it and I read it quickly.

First, the beginning was a bit slow. Starting with what I consider two prologues explaining a little of the aftermath of book one and then going into the setup for what becomes the main storyline of this book, I felt it took a while for the action to get going. I also felt like this longer setup really altered one of the main characters and made them less likeable, or perhaps made me re-evaluate this character because I don’t remember them acting or being this way in the first book. I may need to revisit the first book to see if this is the case, which may alter my enjoyment of the first novel which I really thought was great (hence my uncertainty about a sequel).

Once the story gets going though, it reads like the first book with exciting events happening at a quick pace. This book is, not surprisingly, chock full of more 1980s pop culture references. I admit there were a few areas where my interest in the particular pop culture wasn’t too high and it made the events of those scenes less enjoyable, but it was still engaging and I’m sure those who are fans would get a kick out of it just like I enjoyed other scenes encased in pop-culture worlds inside the OASIS I would love to visit. The downside of these references is the blatant absence of any pop culture outside of the 1980s. I understand the main creators of the OASIS were obsessed with their own era, but this book is supposed to take place in the 2050s or 2060s. There are a few references to more modern pop culture in this book which may be why the lack of any other non-1980 references is so apparent. Also, the few, modern pop culture references are kind of jabs at a specific storyline that basically is the plot structure of this very book, which is either ironic or slightly disappointing.

A few characters that are introduced kind of become sideline characters when I was hoping they would become more prominent, but this story centers around those of the previous book. Again, the overall story I enjoyed and I liked a few places Cline went with the story because they were unexpected and daring considering the content and the modern times we live in, but some of the topics he chose to focus on are the reason I have mixed feelings.

One reason I am recommending the book despite the mixed feelings is that the story keeps you interested and wanting to know what happens next. There is very little I would call predictable and there are a few things I could discuss in more detail but would bring in a few spoiler-related content, so I will refrain and have these conversations individually. After seeing the less-exciting comments about the book, I was afraid that this sequel was riding on the success of the first book and movie of that book. I am happy to say that it does stand on its own. I understand why some fans would not like this sequel though I think many will like it. There are merits for all arguments for both sides. It is impossible to please everyone.

I think if you liked Ready Player One, then you are probably going to read Ready Player Two regardless of what I or anyone else says, which is a great thing in itself and I encourage that. Perhaps you are reading this recommendation after having read this book to avoid potential spoilers much like I refrained from reading any reviews for the same reason. I hope you enjoy or enjoyed the book, or at least felt like you got something out of it that you weren’t expecting.