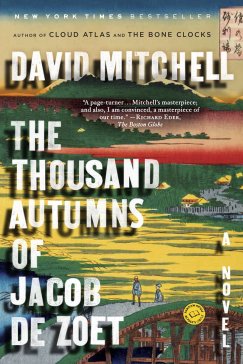 The Thousand Autumns of Jacob de Zoet by David Mitchell was published in 2010. I picked this book up roughly seven years ago after reading Mitchell’s book Cloud Atlas. I consider myself a fan of Mitchell’s work but this is only the second book of his I have read as of today. I have a few of his other novels and intend to read them some day. I think I will try Number 9 Dream or Slade House next. He did just have a new book come out this month titled Utopia Avenue.

The Thousand Autumns of Jacob de Zoet takes place just outside of Nagasaki, Japan, beginning in 1799. Jacob de Zoet is a Dutch clerk who has traveled to Dejima, the man-made island just off the coast of Nagasaki which acts as a trading post between Japan and the Dutch East India Company. This post was the only trade between Japan and the outside world at the time as Japan remained closed to outside influence. Jacob has traveled to Dejima to make his fortune within five years so he can return and wed the daughter of a nobleman. His time in Dejima, and Dejima itself, prove to be a whirlwind of unexpected occurrences and interactions as the turn of the century brings many changes.

The book is split into five parts. The final two parts are short and read more like an epilogue, so I consider the first three parts, the bulk of this ~500 page book, to be the main story. I will admit that the third section had a bit of a lull due to the introduction of new characters. The first two parts included a few characters and plot points I thought were the most interesting of the book, and they take a back seat during the third part but do ultimately get resolved before things wrap up. I was a bit concerned for a moment that a resolution would not occur as I was nearing the end and was still waiting, but it does eventually wrap up, primarily in the epilogue-like finale. Therefore, I would consider this book almost like a four-act play. The first three sections telling the story, and the final two sections as the resolution act.

The writing is phenomenal, which is a large reason I enjoy David Mitchell’s work. Included in the back of the edition I have, there is an essay by David Mitchell “On Historical Fiction” where he talks about how he discovered Dejima, found a new level of respect for historical fiction writers, and how he didn’t initially intend to write a historical fiction novel but the story he wanted to write needed to take place in that particular setting. I must say, the historical aspect alongside the juxtaposition of East and West culture of the time makes for a compelling setting for which the interesting characters then enter to begin the story.

Also, history is often not kind and you should not expect the traditional fiction plot where things always end well for our protagonists. Another reason I think this book held an air of mystery is that almost anything could happen. Good or bad. I was, overall, satisfied with how things ended. I had mentioned I was concerned about certain story elements possibly not begin resolved, but they all tie up nicely even though in ways I did not expect.

Unlike many of Mitchell’s other books, including Cloud Atlas, this novel isn’t split among several narratives and fused together, but rather follows one main character, Jacob de Zoet, though I would consider there to be a second protagonist and two secondary characters who we get to see short stretches from their points of view.

I don’t often read historical fiction, though I have read a few alternate history novels. I usually keep to straight fiction or non-fiction. I didn’t realize this was a historical fiction novel until I was about halfway through. I had assumed the setting was real, but certain events were taking place that I thought were too realistic to simply be fiction and I soon found out that I was correct. I really enjoyed it and may even try more historical fiction novels in the future.