So, J.K. Rowling has been making quite a stir recently with comments about transgender people. She is/was a much admired person by many people in the world and her recent statements have shaken a lot of her fans to the point of trashing her work and refusing to read her books ever again.

I wanted to provide my own stance regarding transgender people as it contradicts Rowling’s and I don’t want my post about her to be viewed as an automatic association of agreement with her personal views. I do have J.K. Rowling listed on this blog as one of my admired authors, which partially prompted me to write this post. I have not reviewed every statement she has made recently, but I’ve been seeing several reactions to her viewpoints.

I also wanted to discuss the responsibilities of public figures, personal opinions, and the association of an artist and their work. Let’s begin.

I believe that transgender women are women and that transgender men are men. I have recently been learning more about the spectrum of sexuality so I am not well-versed in terminology or stories regarding many of those who have been discriminated against because of their sexuality/gender. Though I know such discrimination takes place and am now more aware of the issues with the intent to help prevent such injustices.

I believe that a person’s sexuality is their own and part of their personal life that doesn’t need to be publicly announced or expressed. Any person should be able to express themselves as they wish without discrimination unless that expression either oppresses another group or puts any group at risk. If someone is offended or uncomfortable, then that is their issue.

Not to dismiss anyone’s feelings, but I believe many instances of offense are often superficial or taken as offense out of ignorance or in a way that really has no impact whatsoever on the offended person’s life. I’ve learned a lot about implicit bias and discrimination in the past several years and through my learning I have discovered my own, luckily minor, habits that may have been unintentionally harmful or dismissive. I am actively trying to correct my worldview as to be more inclusive of everyone. Again, I draw the line at allowing any behavior or trends that actively put any group at risk or can cause harm. I see no way another person’s sexuality can cause harm to me, just as my sexuality causes no harm to others.

Public figures (being celebrities, politicians, those representative of large companies such as CEOs or PR heads, or anyone else who has a large audience or can directly influence an industry or group) have a responsibility when it comes to making public statements. I strongly believe that anyone, public figures included, have the right to their own opinions. However, anyone who has an audience or can reach large masses of people should evaluate the messages they send in a public vs. private light on the grounds that it has the potential to influence many peoples behaviors or views. We as a society should strive to create an inclusive community that eliminates discrimination of any kind and work toward a shared, less divisive world. Public figures have the ability to influence large groups and therefore have a larger role in working toward a more cohesive community.

I’ve always been fascinated how people group themselves with others and form bonds as well as associations. I think comparisons are a natural way of learning and do have benefits, but we should be aware of such associations so we can evaluate what we are supporting and why instead of “following the crowd”. I’ve always loved this comic (below), via Extra Fabulous Comics, as a funny, but weirdly true, way people group themselves. 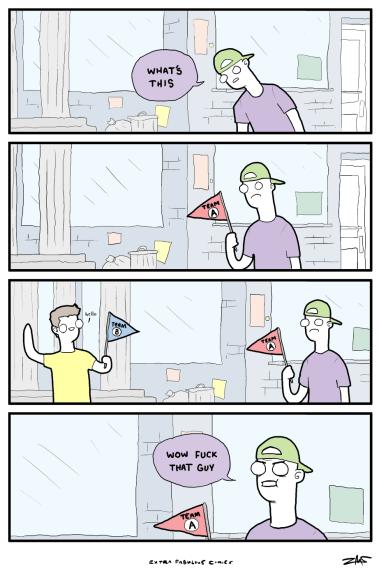 Modern tribalism really. People, sometimes purposefully, will claim their group as the best and spout hate at all others (aka racism, sexism, etc.). I honestly believe this type of thinking is based in ignorance, and of course there are the willfully ignorant, because I find it very difficult to sort strangers into preconceived groups or prejudices. Malcolm Gladwell wrote an amazing book on this very topic: Talking to Strangers: What We Should Know About The People We Don’t Know. He discusses the associations we make with split-second information we gather when first meeting someone. He also goes into why we make these associations, why they are important, but also how they can potentially be misleading or influenced by implicit bias.

Which brings me to forming opinions about public figures, and the association between an artist and their work. I strongly believe in the ability to cordially disagree with someone. It is absolutely possible to have a difference in opinion and remain friends. It can be hard sometimes depending on the topic, but if the difference of opinion dissolves into anger and division, then there is a problem. Neil Degrasse Tyson makes an excellent point in his MasterClass on Scientific Thinking and Communication. Primarily in the Communication category, he gives and example of someone who asked him a question about if we really landed on the moon. Neil asked the person what it would take for them to believe that this event occurred. They stated what they would need to see to believe it, and Neil provided information for the person to research that effectively proved that the moon landing was real. The person returned and stated that the information was legitimate, however….and this “however” was the beginning of the person doubting the information despite its authenticity or trying to justify their original viewpoint. What did Neil do? He walked away. He had provided the proof they stated they would need. They viewed it, but remained skeptical despite the information being exactly what they stated was a requisite to change their viewpoint. Neil realized that if they didn’t accept the very information they requested, then there was nothing more he could do for them and decided it was not worth his time to try and make them change their viewpoint when they were resistant.

Some people are not willing or are not yet ready to have their worldview changed. Sometimes they don’t want it to change even if it is necessary or they are absolutely in the wrong. Sometimes they dig their heels deeper once they realize or sense that they are in fact on the wrong side of the issue. It is not up to us to exhaust ourselves trying to get someone to change their opinion. You can’t force that kind of change. You can, like Neil, ask what they require, provide the information, and let them discover the realization or change on their own. You can help by having a discussion, but if they are unwilling to learn, they are unwilling to change and grow. Again, it is not our responsibility to overcome stubbornness.

Harper’s published A Letter on Justice and Open Debate which was signed by a large number of artists, scholars, historians, etc. which I think does an excellent job outlining the public call for swift retribution for a perceived wrongdoing which often is a result of a miscommunication (but sometimes is outright wrongdoing). I hope you read the letter (linked above) as it details the difference between mob-like calls for justice on things like free speech versus the long-overdue calls for justice against systemic racism or other severe societal issues.

This letter brings me to the distinction of an artist and their work. It is often hard to separate the two, but it is absolutely possible. Many people are boycotting J.K. Rowling after having their once-loved stories disfigured by her personal beliefs. The same likely happened for fans of Orson Scott Card. It’s hard to grow up or enjoy a story like Harry Potter, which shows that empathy can defeat hate, and have that all shaken when the author shares a personal opinion that contradicts the story’s potential.

But I am reminded of the treasure that is Mark Hamill. He was once asked if Luke Skywalker is gay. His response I will remember until the day I die. He said, “It is meant to be interpreted by you. If you think he is gay. Of course, he’s gay…Anything you want is real.” Here is a link to said interview (go to mark 1:02:12 for the exact quote). Works of fiction can stand on their own. If you can’t believe that, go read anything that has remained popular despite it’s creator having died decades if not centuries ago. The stories remain, and they are whatever we need them to be. They are what they are to us. Therefore, for my own sake, I choose to have Harry Potter remain as it always has been to me.

I also believe that one bad deed does not a make a devil, just as a one good deed does not open heaven’s door (please excuse the religious analogy). I disagree with Rowling’s views regarding transgender persons though I have supported her charity Lumos in the past to help orphaned children. I think she has done a lot of good in the world and probably shouldn’t have used her public influence to be dismissive of an already often dismissed group. The retaliation against Rowling proves that the world does not want to condone this dismissal, which is great. Some of the harsher retaliation takes it a bit far. I don’t believe her personal opinion discredits everything she has done or potentially can/will do. She made what I consider to be a mistake and the continuation of the argument has only made things worse. This mistake did not directly harm anyone, but it did promote the oppression or dismissal of a specific group of people, which I have stated I will never support. I therefore disagree wholeheartedly with Rowling on this (and likely other) topics of society and will affirm that stance where necessary.

We have more power to influence this world than we realize.