I found out they were filming a new Dune movie when I was reading the book for the first time about two years ago. The movie is slated to release at the end of this year on December 18th. A few images were released just today and I must admit that I am very much looking forward to this movie adaptation.

I knew the cast was filled with talented actors when the film was first announced. I had finished the book by the time they began gradually announcing casting decisions so luckily my interpretation of the characters were not influenced by the film choices (which has happened in other occasions but few and far between). Below is the majority of the main character castings. 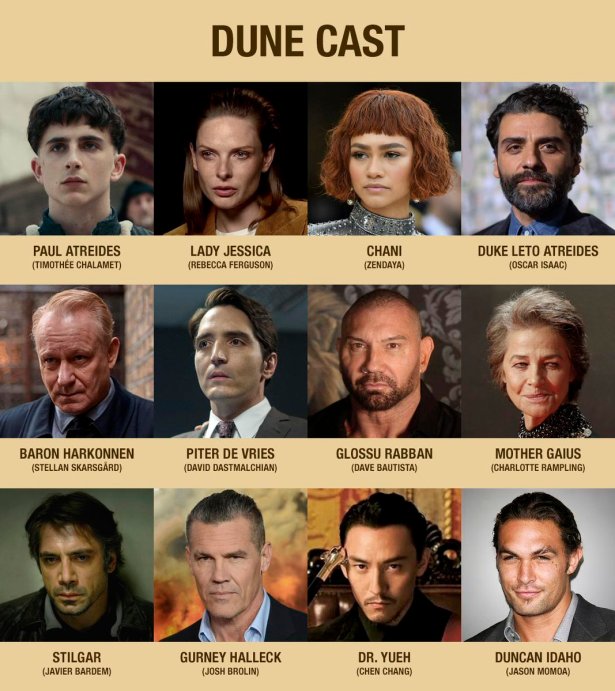 I must admit that I am very interested to see how they transform Stellan Skarsgard into Baron Harkonnen, but I have no doubt that he will portray the character well. A beardless Jason Momoa is interesting but he will likely do well as Duncan Idaho (which I always thought was a strange name). I love Rebecca Ferguson as Lady Jessica and Oscar Isaac as Duke Leto Atreides.

I haven’t seen too many films with Timothee Chalamet, but I understand he is an excellent actor who has already established himself in Hollywood, so I am looking forward to seeing his portray of Paul. I love all the other choices. My only reservation is that movies that have this many stars tend to struggle with sharing screen-time of characters. I think this movie is currently planned as two parts so I hope that will help with this concern. I also think that all the characters are distinct enough that it shouldn’t be an issue.

If you haven’t read Dune, then I recommend that you read it before this movie comes out, and I am excited for you to experience this story. I consider it one of the best science fiction novels of the past century as do many others. I hope you take the opportunity to read it. You’ll likely then join me in the excitement to see a modern adaptation. If you’ve already read it, you’re probably already hyped.

From the few glimpses we are given in the pictures, alongside knowing the cast, I am already impressed. Of course I am trying not to get my hopes up too high, but there is plenty of time to let the excitement settle and better prepare for the film. Going in with too high of expectations always hinders the enjoyment of a movie.

I can already see from the few stills that their portrayal of the desert planet Arrakis is going to be great. I think splitting it into two parts is a wise decision considering the length of the book and the accumulation of events that take place. Doing so will help prevent trying to cram the entirety of the story in one film which has hurt other films in the past. Though I don’t think they will have much room to do so, I am curious if they will include any original concepts that were not in the book. This is always tricky to do but some films pull this off well. I’m not sure what they would even add if they did do this as I think there is plenty already.

Many films also change some things to better adapt it for the screen. It usually works best when the change is necessary to make it presentable in the new medium. Some things just don’t translate well onto the screen. One thing that comes to mind for this film is how they will portray Paul’s growth of mental acuity through the Bene Gesserit training.

Regardless of how they do things, I hope this film adaptation turns out well and does the story justice. I’m happy it will bring the story to a wider audience and even get more people interested in reading the book.