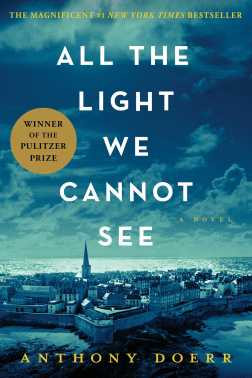 All The Light We Cannot See by Anthony Doerr was published in 2014 and won the 2015 Pulitzer Prize for Fiction. This was one of those books I had seen on bookshelves the year it came out and a few subsequent years where the title caught my interest but I never picked it up. Since it had caught my interest, once a colleague recommended it to me stating it was “the best book he had read last year,” I picked it. I finished it yesterday.

This book is beautifully written. Hands down, it is one of the best-written books I’ve read in a long time. The use of language alone is enough to recommend it, but the story is also compelling. Two young lives impacted by the eruption of war. A young girl, blind and led by her father as they flee their familiar home in Paris. A young boy, orphaned in a mining town and left to fend for his younger sister until his curiosity and aptitude with radio leads him into the German forces as the war progresses. Their lives are connected by invisible waves dancing in the air as their lives careen into the unknown. Despite the interesting characters, I found I was kept at arms length from really getting to know them. I think it was the formatting of the book that led to this. The book is over 500 pages long, but broken into chapters averaging three pages in length. The changes in perspective and the story spanning a decade made it seem more like watching a play than getting into the heads of the characters and experiencing their story alongside them. We are bystanders. Perhaps this is best considering the situations they are in, but I almost felt like I wanted more of a connection with them. The main characters at least.

Doerr definitely did his research. History, locations, technology, and even biological studies of specimens, everything is brought together to bring a rich experience. I think one thing that captured my attention was the descriptions of the radio. We all likely use radios every day, or phones, without knowing a single thing about how they actually work. We take it for granted and because of this I think Doerr is able to bring a magic to it within this novel. Of course, this was before television and the rapid growth of technology that we all have known nearly our entire lives.

Though this is a work of fiction, I think it does a great job of showing how the war changed the lives of the citizens of Europe. Outside of losing loved ones and friends, and living in uncertainty not knowing if they would eat each day, the story is a glimpse inside what it would have been like for both sides during the occupation of France and beyond. It also briefly shows how those changes influenced their lives after the war.

The story feeds off of, and in turn contributes to, the nostalgic time before the technology we know so well. Even though the conflicts of the second world war were horrendous and attribute to some of the worst things in the history of humanity, there is still a sense of simplicity during the first half of the recent century. This could easily be the distance of time between now and then. Daily hardships are also hardly mentioned in history lessons and it is impossible to know how life really was before our own experience.

Yes, the war is a topic many people don’t find interesting because of the terrible things that happen, but this book focuses on our two young characters. I can’t name either a protagonist or antagonist because this is not a story with plain right or wrong (despite us knowing much about the war itself and having our own sense of good and bad). This is a story about life, the wonders it contains, the difficulty of existence, and the choices we make. It is about survival and how to live after the danger passes. It demonstrates the fickleness of life and how unfortunate things happen to good people, and how good people can combat the ill-intentions of others.

I spoke with the colleague who recommended this book to me last week and told him I was about halfway through. He carefully told me that he thought the ending was “appropriate,” and now that I have finished the book I must agree with him. The ending is appropriate. I will leave you to take that as you will.

2 thoughts on “All The Light We Cannot See”