As You Wish: Inconceivable Tales from the Making of The Princess Bride by Cary Elwes and Joe Layden is the endearing memoir about the making of the beloved movie. I listened to the audiobook version as read by Cary Elwes with guest voices by costars Robin Wright, Wallace Shawn, Billy Crystal, Christopher Guest, Mandy Patinkin, Norman Lear (producer), Rob Reiner (director), and author/screenwriter William Goldman. To put things simply, if you like the movie The Princess Bride, then you will enjoy this book. It is filled with fun stories about the making of the movie as well as anecdotes about the cast and crew. The production seemed to be a blast, though of course there were a few hiccups (and memories are often gilded with fondness).

I would recommend the audiobook specifically (I borrowed it from my local library), since it is read by Cary himself and everyone listed above chimes in to discuss their own little stories or point of view about a specific event. Cary does great voices when quoting his friends in the production (my favorites being Andre and Rob Reiner), and it is just an all-around great way to take in these stories. I learned a lot about different actors in the film, especially Andre the Giant who seemed like such a fun guy with an amazing take on life. I had no idea Robin Wright was so young while on the set (the mere age of 20), as well as Cary Elwes (who turned 24 while filming). To show my age here, I wasn’t even alive when this movie was first released in 1987. So I don’t feel in the wrong here for not knowing much about the movie or its production.

I was surprised to hear that it did not do well in theaters upon initial release. This is probably because by the time I watched it for the first time, it was already an internationally beloved film. How could it not be? With so many incredible moments and memorable lines, who wouldn’t love this quirky film? It’s… 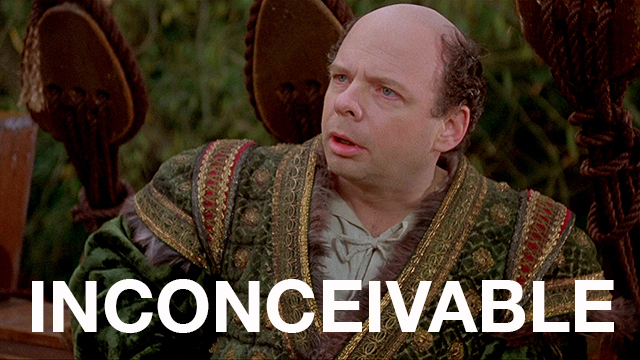 Right? Well, it seems the marketing departments didn’t know quite how to tell the world about this satirical fairy tale that pokes fun while being its own kind of serious with sword fights and giants and the Pit of Despair and the rodents of unusual size. After all, it is all read from a grandfather to his grandson. How could they not adequately tell the world of a movie that doesn’t fit into any one genre or aimed at any particular demographic? Well, they struggled to say the least and the movies theatrical release suffered for it. But the world came to love it for what it was and it has become one of the best-known films on the planet. I was surprised to hear that the movie was considered impossible for the longest time in Hollywood. Either no one knew how to do it or it built a bad reputation of attempted productions that failed before they started. Rob Reiner took it up and just did it. From this book, he made it seem easy too. I’m sure much was glanced over or missed since this text takes place from primarily Cary’s point of view, but it turned out better than I think anyone could have hoped.

I must admit at this point that I have not read the book The Princess Bride by William Goldman. It remains in my to-be-read pile and I know I’ll get around to it eventually. I’ve heard people say not to bother since the movie is so good and considered better than the book. Goldman wrote the screenplay so of course I wouldn’t feel any guilt if I never got around to reading the book, but I enjoy seeing the differences between the books and the films. It is very rare for a film adaptation to be better than the book, but it does happen, and I think I’ll make my own opinion in this case.

I think anyone who has never seen the film would like this book, but of course knowing the film first makes it that much more enjoyable. I had a strong urge to watch the movie again upon finishing this book. I think I may have a deeper appreciation for the film now knowing what I have learned. I can better enjoy each character and actor’s performance. I can look at certain scenes differently such as the epic sword fighting scene, which takes place after the climb up the Cliffs of Insanity (actually filmed at the Cliffs of Moher in Ireland where I visited last year). I know exactly which scenes were filmed after Cary broke his big toe. There is so much more I can enjoy while watching the film now. So many little tidbits of information I can revel in knowing, but of course it is just as fun to sit back and enjoy the film for the masterpiece it is. As for this book, it is a glimpse behind the curtain. A glimpse filled with so many heartwarming tales it could even compare to the film it details, but let’s not get into the chicken or the egg argument.

2 thoughts on “As You Wish”