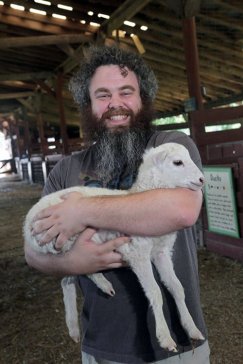 Patrick Rothfuss is the author of The Kingkiller Chronicles series, which I would say, in my honest opinion, is the best epic fantasy story written in the past 20 years. I know there is a lot out there and maybe a few can refute that claim, but I have not read or heard about any of them. And I can always go back to the “well-written” aspect of my claim. These books are extremely well-written and I found myself impressed with the wordplay and structure as much as the story itself. Before I start fawning over the work, let me tell you about the man behind them.

I first discovered Pat (as many of his fans call him) about two and half years ago when I happened across a video on Twitter. I had just started a Twitter account and was kind of looking around and learning the ropes and discovering the amazing writing community on there. Ironically, I let those on Twitter pick my next post for my On Authors section and they chose Patrick Rothfuss. The video was actually promoting another book by another author who I hate to say I had forgotten until I began thinking about writing this post about Pat. I actually saw a book by this author on display and it helped me remember. Her name is Sabaa Tahir and her books are now, as they should have been, on my TBR list. Anyway, the video was Sabaa and Pat simply sitting down and having a chat and answering some questions in what is probably the most laid back and fun “interview” that I have seen by a writer (or pair of authors). I remembered hearing the name Patrick Rothfuss coming up here and there, mostly on Twitter. I watched this video and thought: Wow, this guy seems super cool. I’ll look into what he has written and check him out.

So about six or eight months go by and I get more reminders about these books (I did follow him on Twitter after all), so I pick up the first one. It is not a small volume. I start reading it and am unsure for the first few chapters but it is setting up the world the story inhabits so I stick it out and fall right in. I literally fell hard into this book. I devoured it, and the sequel, in less than a month. All while I was working on my MFA and working full time. The first book, The Name of the Wind, was released in 2007 and clocks in at just over 250,000 words. The second, The Wise Man’s Fear, came out in 2011 and was just under 400,000. A third book is still in the works as of now but there are a few supplemental works that go along with the main story. These include A Slow Regard of Silent Things which is a novella about the beloved, innocent, and mysterious character Auri, and “The Lightning Tree” which is a short story about Bast, a scoundrel character that you like but are a bit wary about. I quickly read these two additions as well. There is nothing quite like A Slow Regard of Silent Things either. It is of course dependent upon the knowledge of at least the first book of the series, but it could possibly be read on its own. It may be a bit confusing that way though. Either way, it is endearing and…well…quite unique.

The Kingkiller Chronicles jumped way up on my list of favorite reads. Pat’s books are the first I’ve bought specifically for the purpose of giving away just to introduce friends to his work. I joined a Facebook group of fans and they all love these books probably more than me. Some have read the series dozens of times. I’ve only read through them once but will be re-reading them when the third book is announced to come out. These people love Pat and some have even seen him at expos and events and they all share their love of the story and it is just a fantastic group to be a part of even though I don’t participate much. I just love seeing all the stuff they talk about and the group keeps everyone informed about related news. 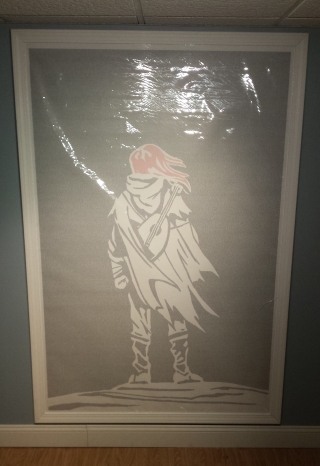 The first book recommendation I wrote was for The Name of the Wind and it was a grossly underwhelming recommendation. I updated it to slightly amend that negligence, but it will always fall short. It does have a bigger version of this picture (right) which I bought from Litographs. It is made from the entire text of the first book. All 250,000+ words. Yeah, that picture is made from the words of the book (see below). It goes pretty much floor to ceiling but it’s awesome. I had to build the frame specifically for the poster. I think I may have gotten a link to it from the Facebook group. Anyway, it is always great to find fellow fans.

Now, there are some people who have been criticizing Pat for how long it is taking for book three to come out. I wrote a post that will be up soon about “fan etiquette” that discusses the last season of Game of Thrones so I won’t go into my “be a good fan” speech here. Instead I will simply say that I understand their frustration but I also understand Pat’s situation. His first book became a bestseller, and rather quickly. He even talks about writing sequels in the video above with Sabaa. He is a thorough writer and I do not mind waiting for book three or anything he works on for that matter. He is incredibly talented and I have an inkling that book three will be even larger than book two. It will probably destroy its readers emotionally as well. As good stories do. Book three does have a supposed title which is The Doors of Stone. Pat says he will provide us the book when it is ready. I can’t wait but I will, patiently, as should everyone.

Pat does a lot outside of his writing as well. He streams videogames and interacts with fans and talks about the world he built. He has even done a video of pronunciations of words, names, and places in his books. These pronunciations are also included in the 10th anniversary edition of The Name of the Wind. The video is actually hosted on the Youtube page of the charity organization he is a part of called Worldbuilders. They have some awesome things that they sell to raise money for their charity (I think Pat’s streams also are often for this organization; I’m not sure since I’ve only seen tidbits). I bought a few mugs from Worldbuilders that were replicas from an important tavern in the books. It is called the Eolian. The mugs are well made. I encourage you to check this charity out since they have a lot of cool, nerdy stuff from a lot of other series, writers, and talented people. They do a lot of cool things to help make the world a better place too. Speaking of talented people, Lin-Manuel Miranda is actually working on an adaptation of The Kingkiller Chronicles for television. Rumors are that it will actually be a prequel (?) to the first book. I’m not sure about the story, but I’m sure it will be great to see this world created for the screen which is always a hard thing to do.

On to the reason I started this little series, or section, of my blog. What does Patrick Rothfuss mean to me? Well, he means quite a bit as I’m sure he means a lot to others who are fans of his work. He is not just an author who wrote a story I can lose myself in though. I don’t know him personally or know much about his personal life as I do other authors, but unlike several other authors I have been influenced or inspired by, he is alive and well and actively participating in the world. It is easier and less intrusive to learn about the life of someone after they are gone. However, I am okay not knowing personal details. Especially about people still rocking it. For me, Pat is an inspiration for my own aspirations. His mastery of storytelling is something I can aim toward. He does great things outside of his writing as I hope I can or am doing.  I hope one day I have a chance to meet him. Perhaps if I get off my butt and finish a few books I might get that chance. If not, I’ll always have his books.