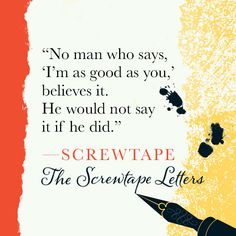 This week’s book recommendation is The Screwtape Letters by C.S. Lewis. My now father-in-law bought this book for me over a year ago and I just got around to reading it last month (that to-be-read pile never decreases). Of course, Clive Staples (C.S.) Lewis is best known for writing the Chronicles of Narnia series. I haven’t read that series, and now that I think about it, this might be the first of Lewis’s books that I have read.

This book reads as a collection of letters sent by Screwtape, a demon/devil, to his nephew, Wormwood. The letters offer advice on how to effectively tempt a human in such a way that they end up in Hell as sustenance for fellow demons. Though I am not a religious man, I enjoyed this book for several reasons.

The first being the historical context and reassurance that humanity has suffered the same or similar societal issues for at least the past 100 years. This book was published in 1942. Many of the tricks that Screwtape offers his nephew to persuade his patient are also reflections on human nature and its social interactions. I was surprised to find many of the behaviors spot on even for today, nearly eighty years after they were written, in a time drastically different due to technological advancement and the connection of humanity across the world by the ambivalent internet.

I know that C.S. Lewis had a crisis of faith at one time and that J.R.R. Tolkien, along with another friend, helped him during this time. The result ended up with Lewis bolstering his beliefs and going on to write many theologically influenced books, including this one. Lewis even dedicated this book to J.R.R. Tolkien. Lewis and Tolkien were best friends as they taught at Oxford and remained friends their entire lives. They often reviewed each other’s works and offered advice. I could go further into their relationship, but I’ll refrain because I’ll end up talking more about Tolkien than Lewis and this book of his that I’m recommending.

The letters often refer to a war and how it could be used to win the battle for the human soul. This war refers to World War II, but I wouldn’t be surprised if World War I had some influence as well. Apparently there are many ways for us humans to be influenced toward sin and other actions. There is also many ways we can seemingly be redeemed (and fairly easily). This book is considered a “Christian apologetic novel” and honestly I’m not entirely sure what that means, but the book has many interesting lectures I think anyone can enjoy. Lewis stated that he had a hard time writing this book because Screwtape was such an abhorrent character (being a demon). Luckily for us, he was able to produce this interesting religious and social commentary.

2 thoughts on “The Screwtape Letters”