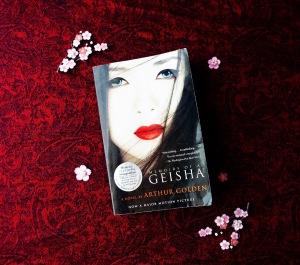 This week’s book recommendation is Memoirs of a Geisha by Arthur Golden. This book is extremely well written and gives a glimpse into a way of life that I think was obscure even when Geisha were common in Japan. This book is a complete fiction as Mr. Golden overtly informs us, but it is written to be almost a believable and enticing memoir. The story is enthralling in its simplicity and accuracy, which was honed by the significant research done by the author.

I remember when this book became a huge hit. It was originally published in 1997, but became a movie in 2005. I was probably too young to appreciate the story and again too young to appreciate the movie when it originally released. Though I do recall overhearing that the soundtrack for the movie was exceptional. I have always been a fan of John Williams’s work, so this one aspect kept me intrigued. However, I didn’t read the book until just a few weeks ago, and I still have yet to see the movie.

I can’t say what prompted me to read this book when I did. I had bought it a few years prior at a used book sale put on by my local library. There were plenty of copies because, as stated earlier, it had become a huge hit over a decade ago. I knew it had to be good since it made a stir not only in America, but across the globe. I had just finished a science fiction book I greatly enjoyed and was piddling around for a day or two trying to decide what to read next when I happened to pick this one up seemingly at random. I was quickly drawn in and enjoyed it immensely.

This is the only book Arthur Golden has written (so far) and I am not sure if he plans to write any more. It’s been over twenty years since this book came out, but I’m always one to never say never.

You may have already read this book or have at least heard of it already. If you haven’t read it, give it a try. If you think it is something beyond your area of interest, you may be surprised as I was (though I do read biographies and memoirs from time to time). It is never a bad thing to open your mind to new ideas or broaden your horizons. Having a better understanding of other cultures and other people makes us more empathetic. This book is a work of fiction, yes, but it is based in history and facts from the time.

After all, books are meant to show us things we’ve never seen before. To transport us places we may never go (even if it is somewhere we are capable of going). Through them we can experience impossible things like going into the past or completely different worlds. We can learn so much within the pages of a book. Even if the contents are completely fabricated. We may learn even more because they are.

One thought on “Memoirs of a Geisha”