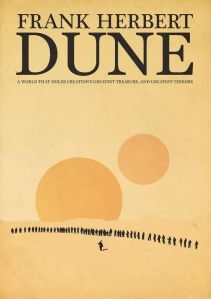 This week’s book recommendation is Dune by Frank Herbert. This book is considered one of the best science fiction novels of all time and for good reason. The book originally came out in 1965, shared the Hugo Award in 1966 for Best Novel, won the inaugural Nebula Award for the same category, was turned into a movie released in 1984, adapted into a miniseries released in 2000, and was in the recent Great American Read coming in at #35 of the 100 best-loved novels.

All of these recognitions aside, I personally loved this book. It is a little lengthy and the ending seemed fairly abrupt (which may be addressed in the sequel), but I immensely enjoyed the writing and story. There are 20 Dune novels in total. Six were written by Frank Herbert himself while the remaining 14 were written by his son, Brian Herbert, and Kevin J. Anderson. I have only read the first Dune novel and am currently unsure if I will pursue the next five or other 14. I am satisfied with the first book in itself. The story was solid and engaging and wrapped up nicely enough that I don’t feel an overwhelming need to continue, but of course I enjoyed the book enough that I may feel inclined to want more at a later date. If you are looking for a long series to get lost in for a while, look no further.

What I found so interesting about the book was the near superhuman abilities some characters have based on training and biological changes that occur due to the strange melange substance that stands central to the story. Herbert writes these scenes expertly and the world he created is tangible and guides the imagination without forcefully taking the reigns or leaving you without a map. The characters are compelling and I found myself having mixed feelings about several of them. The description and focus on certain elements was fascinating. The way water is so important that large efforts are made to preserve even the smallest quantity was brilliant. This makes sense on a desert planet, of course, but it makes you think because we live on a water-rich planet ourselves (and I love stories that make me think). The actions of the Fremen society in the book are based out of the basic need to preserve water. This brings an understanding to otherwise absurd or inhumane actions.

I understand why this book became so popular and why so many people wanted more about the characters and worlds that Frank Herbert created. I’m glad I finally got around to reading this one. This book deserves the praise it has been given and is rightfully regarded as “Science Fiction’s Supreme Masterpiece.” Is it better than every other science fiction story? No. But it is one of the greats.

I’ll finish this recommendation with a brief summary so you can determine for yourself if you would be interested in the story.

Paul Atreides, son of the Duke Leto Atreides, moves to the planet Arrakis when his father is given charge of the planet and its production of spice (melange, and most valuable substance in the galaxy) by the Emperor. Leto knows this move is a trap by a rival feudal family, the Harkonnens, who previously had control of Arrakis and spice production. The Harkonnens desire the end of the Atreides family. Despite knowing it as a trap, they move to the desert planet and prepare for the expected treachery. What ensues envelopes the entire galactic system including the Emperor himself.