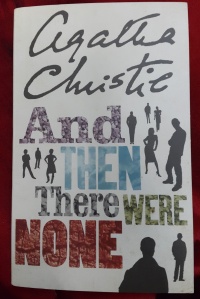 This week’s book recommendation is And Then There Were None by Agatha Christie. This was one of my required readings in high school (or was it middle school?). I absolutely loved it, and I need to read it again soon.

This book was originally released in 1939 with a very different title that was changed for obvious reasons. The original title, Ten Little Niggers, was apparently taken from a song (or possibly a nursery rhyme). It has another title, Ten Little Indians, but when introduced in America in 1940 it was given the name that it has since been known by. Obviously the title change was needed and in no way would be seen on shelves today. Luckily it escaped its title issues because it is truly a great read, has gone on to sell over 100 million copies, is the most popular of Christie’s books, and back in 2009 was listed as the sixth best-selling novel of all time.

The story takes place in the late 1930s. Eight strangers are invited to a house on an island where they are met by two others. After dinner, a recording is played that accuses each member of a murder they have committed in their past. Then one of the guests is killed and what ensues is an intricate game to discover the killer and survive.

Many stories have used this premise since this book was published, which just goes to show how popular and influential it is. The first movie based on the book came out in 1945. The most recent adaptation I found was made few years ago in 2015 as a television series. I won’t be surprised if we see a newer movie made about this book in a few years. After all, we just got another remake of The Murder on the Orient Express which is another of Christie’s novels.

If you like mysteries, or just like being drawn into a book where you can’t stop reading, then read this one if you haven’t. It is on the Great American Read Top 100 list for a reason. Christie is considered a master of mystery and is a popular author whose works have and will continue to entertain readers.