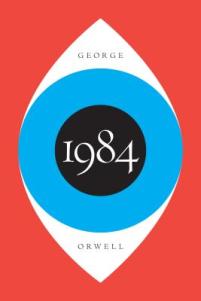 This week’s book recommendation is 1984 by George Orwell. I’m was actually surprised that I haven’t recommended this book before now. Many think the title 1984 is an inversion of the last two digits of the year it was written, which was 1948 (published in 1949), but I’m not sure this was ever confirmed.

This book takes place in a dystopian future where the world is continually at war (as is common in many dystopian futures). The war is referenced but not really commented on besides how it is used to oppress the people and explain shortages of everyday items such as chocolate or razer blades. You may have heard some of the terminology from this book, such as Newspeak, Thought Police, and Big Brother. The popular slogan of the government in the book is also something you may have heard. It goes:

This book is thought-provoking in many ways and shows both what a human, and human society, can endure under an oppressive establishment. It also highlights humanity’s desire to be free and independent. There are several concerning things that are considered common practice in this dystopia. The most frightening for me was the main character’s occupation. Winston Smith works in a government building where his job is to “correct” past news articles to align with the current government’s views and actions.

For instance, he changes something as trivial as the chocolate ration. An article a few months earlier state that the ration has been changed from two bars a day to one bar (I’m paraphrasing this just to give an example so don’t quote me). The government, aka Big Brother, is reducing the ration again to only half a bar, so Winston is given an article to change. He changes it to read that the ration was actually one-quarter of a bar several months ago. So now, the people will read and believe that the new ration of half a bar is actually an increase in chocolate and they will all be happy about this improvement despite the reality that they will be getting less. There is a whole department dedicated to the changing of past information. This is terrifying on so many levels.

Ironically, 1984 returned to the bestsellers list last year (2017) because of today’s political climate. I first read it a few years earlier (maybe 2015). Despite the sometimes somber content, I enjoyed it because it was interesting, thought-provoking (I like pondering new ideas), but also frightening because there have been some countries in the world that may have experienced similar events in the past.

This book was banned in Russia in 1950. Even owning a copy at the time was cause for arrest because it was considered anti-communist propaganda. It was also banned in several countries in Europe at this time along with Orwell’s novella Animal Farm, which was also considered a political commentary.

I couldn’t imagine reading this book and realizing I would be living certain aspects of it. I’m thankful I can read it comfortably and allow it to improve my understanding of the world, people, society, the past, and allow me to understand how fragile information can be. It makes me feel responsible to ensure that facts aren’t muddled when there is irrefutable evidence. It also makes me feel responsible for my neighbors. To stand up if anyone tries to take away their freedoms, even if mine are in no way threatened. This book is both a warning and a call to action to prevent injustices.

Most of this book follows Winston as he tries to live a better life without being caught for his indiscretions against the state. He attempts to love someone he shouldn’t. He goes places he otherwise wouldn’t be allowed. He does things any of us would, but he has to always be looking over his shoulder. You may be surprised how this book ends, but I hope it makes you think. After all, some of the best books help us grow.