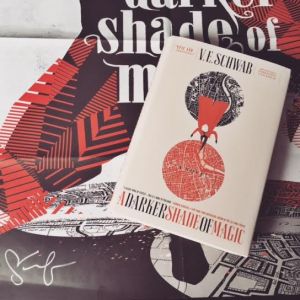 This week’s book recommendation is A Darker Shade of Magic by V.E. Schwab. This book is the first of a trilogy, but can be read as a standalone, which means the other two books are there for you should the first leave you wanting more (which it probably will).

I first discovered V.E. Schwab before I’d discovered her books. It may seem strange, but it’s not the first time it’s happened for me. Maybe it’s because I’m getting older and see things differently or it’s because I’ve become serious about my own writing and have started staying tuned into those leading the field of fiction. I don’t know, but this is not the first time I’ve discovered an author before reading their work.

Anyway, I discovered Victoria as a person and thought she was pretty cool and decided to read her book which I am now recommending to you. I’m also recommending you watch her delivery of the 6th Tolkien lecture titled “In Search of Doors” which took place two months ago. I’ll provide a link to that here (“In Search of Doors”) because I thought it was brilliant, especially when she begins by stating she has never read Tolkien. Watch it and you’ll understand why I was initially drawn to her work because of her as a person.

Now onto the book itself. A Darker Shade of Magic (ADSOM for short) centers around the character Kell. He is unique because he possesses a rare magic which lets him travel between Londons, of which there are four. Stay with me here. There are four Londons that are identical but are essentially within different dimensions for lack of a better word. The city is the only constant between the four worlds and each has varying degrees of magic that flow through it. Kell is from Red London which is prosperous in magic. Grey London is where us commoners (or muggles if you prefer in this context) would hail from. White London is a power-hungry world. And Black London is a world that was consumed by magic. When Black London fell, the doors were shut between “dimensions” and each world was effectively lost to the others, except to those capable of traveling between them with their own magic.

That’s all the setup I’ll provide. After all, this is a recommendation, not a review, and I would hate to spoil anything for you. If you like reading about magic and the worlds that contain them, give this one a shot. I was in a pretty bad reading slump when I decided to read this one. I read it quickly and enjoyed it thoroughly. I hope you do too.

One thought on “A Darker Shade of Magic”