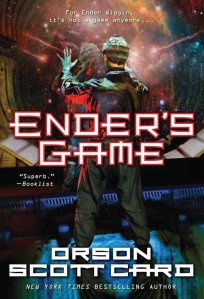 This week’s book recommendation is Ender’s Game by Orson Scott Card. Many of you may have read this book already. It’s fairly popular even outside the science fiction genre (if books can even be contained in such a fashion). This book was published in 1985 and was based on/is an extension of a short story of the same name originally published in Analog (a science fiction journal) in August of 1977. Since then, Orson Scott Card has written 15 other books that follow the same timeline with the most recent being published in 2016. (Please don’t freak out at the length of the series because I’ll be honest I’ve only read Ender’s Game which is the only book in this recommendation so hold on to your butts. I just wanted to provide the information.) I’m unsure if Mr. Card is still writing more books for this series, but either way, if you like this book and want more then there are plenty for you to read. Go nuts.

If you’ve never heard of this book, here is a brief summary by me that will at least provide the essentials.

Earth is attacked by aliens (oh no), but the human race is able to fend them off (yay). Fast-forward several decades and Ender is born. He is selected to be part of a military program where he is launched into orbit to attend a highly prestigious academy that tests all of its students in a zero gravity battle arena. They are in teams and compete to be the best. This is all in place as preparation for another alien attack. At least, that’s what we are told…

Did that get you interested? Cheap trick, I know, but it’s a book recommendation. I want you to read it because I think it’s good. If you have totally different reading tastes than me, then take it with a grain of salt. I thoroughly enjoyed this book because of its dual story-line (I can’t say too much or it would be a spoiler) and its battle scenarios being created as puzzles for Ender to solve. Each “test” is a fun read.

A movie of this book was made in 2013, which I thought was a good adaptation of the book. It was entertaining and the visuals were impressive. Harrison Ford is in it. He doesn’t really make bad movies (at least from what I have seen save for Blade Runner but that is another discussion altogether). If you like the book, check out the movie, but read the book first. Books are almost always better (98% of the time I’d say).

Well, there you have it. Ender’s Game. A science fiction book great for young adults and million-year-old time travelers and everyone who falls in between those age ranges (if you’re over a million years old, I’m sorry, you can still read it but you may need some context).

One thought on “Ender’s Game”