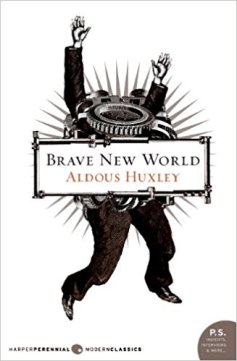 This week’s book recommendation is Brave New World by Aldous Huxley. It’s a dystopian novel that was written in the early 1930’s but is still an excellent read. I think I read it in just a few days. Somewhat science fiction and futuristic while somewhat vintage, it does a great job of criticizing humanity in many ways. An early scene in the book, perhaps the opening scene, has been highly influential in recent fiction and film.

The setting takes place in a world where humans are genetically bred and pharmaceutically anesthetized to passively serve a ruling order. In such a world where everyone takes drugs to maintain “happiness” at all times, we follow a character who starts to question this practice and who looks for a better meaning to his life.

I think you’ll find a lot more in this book than you may originally think. Even though it was written a long time ago, it still reads like a contemporary novel. I say give it a shot if you haven’t already. You may be surprised at what you find.

One thought on “Brave New World”